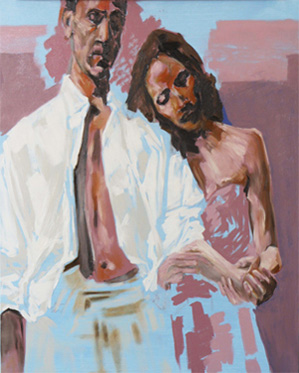 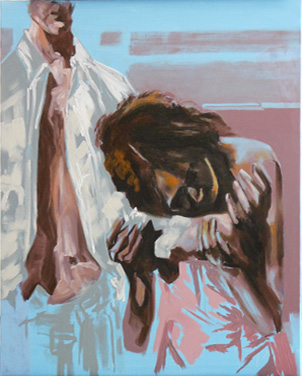 Peter Cerutti is an international recognized medical researcher who has received numerous rewards for his contributions to our current understanding of cancer and ageing. On leaving his scientific career, Cerutti followed his second vocation and redirected his creative energy to painting. Many of his works express the multitudinous aspects of the life of modern women. They are a glowing tribute to feminine elegance. He depicts youthful figures in apparently weightless motion which seem about to leap beyond the bounderies of the canvas. An elaborate choreography brings together feminine bodies, disloquates them, and makes them unique in order to show the particular character and singular beauty of each figure ... Nothing in Peter Cerutti’s work is agressive, provocative or incongruent. It is without doubt this character, unusual in contemporaray art, that is the captivating feature of his work, and reflects a perfect command of texture, composition and colour. Cerutti’s multifaceted vision looks into the 21st century from the perspective of today’s complexities and promises. His paintings uniquely express the emotions of today’s life.

To quote Peter Cerutti : «The arts of the 20th century have been strongly influenced by progress in the physical and medical sciences. In particular, the importance of the subconscious layers of our mind has been recognized by Freud, Jung and others. This has resulted in the notion in artistic circles that direct expression of the subconscious would result in revolutionary «modern» work. However, only a few artists have succeeded in creating such works of genuine «art brut». Indeed, I question the concept that artistic emotions are more readily communicated by circumventing the conscious mind. How would we be able to explain the lasting impact of the «traditional» work of great painters of the past centuries ? In my work, I attempt to express the spirit of today («Zeitgeist»). I strive to communicate fundamental feelings and laws of nature by organizing basic patterns of colours and form into the figurative contents of my paintings. »